Well, not so much studio as "deskspace". Still, this where I sit and make noises. Sometimes even voluntarily. 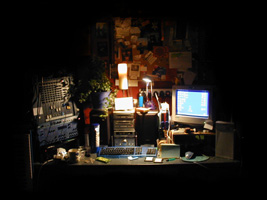 My studio equipment, such as it is, consists of:

PC running Orion Platinum, and masses of other random bits and pieces of demo / open source software that get picked up and abandoned as the whim takes me - or as my hard drive crashes and I lose them all and I have to start again....

Novation Supernova II R (rarely used but when it is, it's lush).

A battered electric guitar, some important bits of which got doused in candle wax in one of those annoying random incidents.
Mixers and audio interfaces and all that jazz.

And occasionally a Minidisc recorder which gets used all too rarely to record the sound of distant hills, ambient sounds and storms, which are then fed back in to the music to give it a more earthy feel (or at least to give me a sonic background to work with - rather than a totally blank page). And for the record - yes, distant hills do have a sound. Although it's more the ambient sound reaching the hills overlooking the city that interests me.